Eeva-Liisa Manner (1921-1995), a pioneer of the post-war modernist movement and an artist of great passion, intelligence and linguistic virtuosity, has been recognized as one of the most significant figures in the history of Finnish literature.  Her talents encompassed poetry, prose, translation and drama.

Manner’s first play Eros and Psyche (1959) is a beautiful lyric drama which takes its inspiration from Greek mythology.  It was made into a film in 1998.  Manner’s breakthrough as a dramatist came in 1965 with her work New Year’s Night.  A piercing yet compassionate tragicomedy which spirals with increasing intensity towards its frenzied conclusion, the play is a study of human weaknesses seeping through the veneer of sophistication.

Snow in May (1966) is a touching satire of family mores, in which generation conflict, as well as common concepts of beauty, love and morality come under the author’s sharp scrutiny.  Manner’s best known play is Burnt Orange (1968), which portrays the case of an unstable young girl in the care of her psychiatrist. Rich in vivid poetic imagery and bold fantasy, the play challenges conventional beliefs about mental illness and sanity.  The play was an immediate success on its opening and has since been recognized as a modern classic.  It was made into an opera in 1975, with music composed by Tauno Pylkkänen.

Paavo is a civil servant with a drinking habit, Helena is his sensuous wife who wants more out of life.  Their marriage is a bizarre union of mutual disdain and dependency.  In walks Lassi, a young male student and aspiring poet whose romantic devotion to Helena both intrigues and irritates her.  When the couple’s young daughter Maija starts competing for Lassi’s attention, the situation soon spins out of everyone’s control.

Eeva-Liisa Manner’s family portrait is a mordant critique of love and morality set against the conflict between different generations and genders.  The author’s trenchant satire is nevertheless infused with poetic beauty and subtle mystery.

Doctor Fromm’s new patient Marina is a seventeen-year-old girl who has withdrawn into a world of her own, speaks in tongues and sees headless men.  As he delves into the recesses of her psyche, the Doctor is forced to reassess the divide between reality and the imagination, between normality and madness.  Are the visions of a disturbed mind any more unhinged than the accepted conventions of ordinary society?

Manner’s modern, poetic classic glows with colour, passion and the lust for life.  A ‘ballad on the dangers of words and blood’, the play challenges concepts of both love and normality.

Translated into English, French and German. 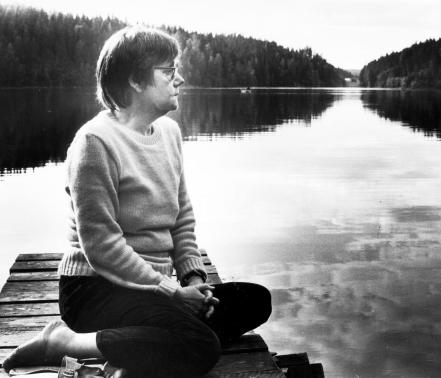