Katja Krohn's (b. 1966) funny and anarchic plays are entertaining for audiences of all ages, in no small part due to their fast-paced yet sensitive handling of their subjects. In her work, familiar patterns are turned upside down, and everyday things are seen from new angles. Krohn demonstrates that it is possible to write high-quality, innovative theatre for children.

Kinkku pahana (The Broad with Boiling Blood, 1998) examines taboos about motherhood and marriage. Its main character is a woman who tries to create a theatrical performance about motherhood and is forced to confront who she is and what she wants.
Poor Poor Lear (1998), co-authored with Nina Sallinen, is a one-woman play about an old actor, whose own story parallels King Lear’s. This play has also been performed in the United States. Iso paha susi (The Big Bad Wolf, 2003) is a joyous reinterpretation of familiar fairy tales, full of suspense and surprise. A wolf who has accidentally eaten his wife must find his son some food, while at the same time the boy experiences the pangs of falling in love for the first time, with Little Red Riding Hood of all people. The play was chosen as Play of the Year in 2003, and has been performed, in addition to over 12 Finnish productions, in Sweden and Estonia.

The children’s play Sotta Pyttynen (Messy Mack, 2003) tells about a very neat boy and his very messy grandfather. This play, targeting pre-school and elementary-school age children, teaches children about manners in a funny way, without preaching.

Pikkujättiläinen (Small Giant, 2011) combines masterly global and family crises in a story of middle-aged scientist who tragically fails to balance between her work ambitions and family.

Laura is trying to create a play about being a mother, but doesn’t know where to start since she spends most of her time feeding, comforting or putting her children to bed. Her mother and her mother-in-law just get in the way with their offers of unsolicited help. She can’t get her husband to lift a finger, though of course he still wants sex whenever he can get it. Laura needs to stop blaming herself or others, as well as ask herself what she truly wants.

The Broad with Boiling Blood ponders the many, and conflicting, expectations society has for women and mothers. It puts familiar everyday situations on stage, filling them with side-splitting comedy. The play doesn’t preach, but rather explodes open myths of motherhood in a wildly anarchic way.

“I know I’m stupid. But it’s ‘cos I'm always mad about something. You try being calm when there’s always somebody tugging at you, then you’ll know what I mean.”

A wolf gets so ravenous he accidentally eats his wife, leading to unfortunate consequences: now a single-parent, the wolf needs to find something to feed his son Rupert, and he himself soon begins to feel the pangs of hunger. The wolf hunts young goats and pigs, but they are all a little too smart to get caught. Meanwhile, Rupert’s problems are mounting: in addition to having lost his mother, the pigs are bullying him at school. The only bright spot in Rupert’s life is Little Red Riding Hood, but this romance looks like it’s going to be nipped in the bud when Daddy-Wolf decides to make the girl his next meal. . .

The Big Bad Wolf is a fast-paced and fun-filled drama for the whole family, where familiar fairy tales are twisted in new and surprising directions. In this topsy-turvy world, the pigs are harassing the wolf, and Little Red Riding Hood decides to disguise herself as her grandmother. In the wild finale, the most famous scene of Little Red Riding Hood is sent spinning around the maximum number of curves, and nobody can be sure whether the wolf ate the grandmother or vice versa. Viewers of all ages are sure to enjoy the fun.

In the midst of all this craziness, the play talks about important issues, like loneliness, bullying and love.

“A wolf has a wolf’s temperament, and I am a wolf. This is what we’re like. Our feelings are boiling hot or freezing cold, but never warm like dishwater.”

The play has been translated into German, Swedish, Estonian and Russian. It has been performed at the Norbottens Theatre in Lulea, Sweden, at the Vanemuine Theatre in Tarto, Estonia, at the Rostock Volkstheater and the Schleswig-Holstein Landestheater in Germany.

Four-year-old Ian is spending his first night away from home. His grandfather Messy Mack is trying to take care of him, but Ian's neat and orderly habits and Mack’s unbelievable clutter and carelessness require major adaptation on both sides. Mack isn’t used to wearing pyjamas or eating with a knife and fork, nor is Ian used to playing football indoors. In the end, however, they manage to have a pleasant evening together, and perhaps both learn something in the process.

The play is full of hilarious word-play and rhyme. The humour mainly comes from turning familiar patterns inside out: the boy is neat and meticulous, whereas his grandfather is an impossible bungler. The play demonstrates, however, how two very different people can become friends and understand each other’s quirks. At the same time, it offers younger—and perhaps also older—viewers useful lessons in how to behave.

"My tools I store under my bed; my hot dog though goes under my head. My books are spread over the blanket. My money? Well, my mattress banks it. Sleeping in my bed is awfully tough, You’d end up drowning in my stuff.”

In the eyes of the world, family problems seem like small scale predicaments, but on the personal level they lead to huge tragedies. For someone losing their child, the ecological disaster lurking in our western way of life seems irrevelant. How is one to settle decisions in life: on the small scale or on the big scale of things?

Ever since she was a child, scientist Kristiina Suxén has wanted to do something that would benefit the whole world. She spends her nights at the laboratory and her family always comes second to her career. Her 17-year old son Karo would urgently need some attention and her partner Markus woudn't mind some help with the situation at home. Approaching her 40's, Kristiina wants another child as fast possible.

She is on the brink of an enourmous breakthrough with her research on renewable energy sources, when she is not appointed for the office she had wanted at the univesity. Taken aback she leaves the academic world to venture into the private sector. Her new job is abroad and that's not the only challenge. Karo is rapidly slipping away of her reach and her relationship with Markus is falling apart. Then again she might have found the solution for the oil shortage. What in the end of day is most important right now?

Krohn has written a wonderfully witty, warm and tragic drama, with one of the most controversial female characters of contemporary theatre. With a masterly combination of global and family crises, Krohn succeeds in painting a vivid picture of what it means to be living in our time.

The play premiered at the Finnish National Theatre on 2.12.2011. 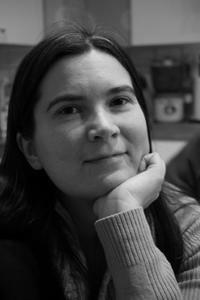