Anna Krogerus (b. 1974) writes sensitive and multi-layered plays, full of deeply introspective characters who find themselves balancing between anxiety and joy. Krogerus's precise portrayals, coupled with her insightful use of theatrical methods, make her texts easy to approach and rewarding to act.

Krogerus writes her plays in close collaboration with directors and actors. In addition to her own texts, she has also worked to advance the development of new Finnish drama in the KOM text project of the KOM Theatre, as well as working as a dramaturge at Kajaani Municipal Theatre.

Laulu hukkuneesta tytöstä (Song of a Drowned Girl, 2001) premiered as part of Songs of Ice and Wind, produced by the Jyväskylä Municipal Theatre. Jyväskylä also saw the premiere of Heikko esitys (A Lousy Performance, 2004), a play set in the world of theatre, examining the themes of shame and sexuality. Isin talviuni (Daddy's Winter Dream, 2005) is a children's play about a burned-out father and his little daughter, who through the power of imagination overcomes difficult situations. Also set in the world of children is Krogerus's adaptation of Peter Høeg's novel, Borderliners (2005). Krogerus’s play depicting a troubled family, Rakkaudesta minuun (For Sheer Love of Me) premiered at the Finnish National Theatre in 2005, achieving both critical acclaim and popular success. Kuin ensimmäistä päivää (Always a Day Away, 2007) deals with the crisis of old people's care in today's society. Parhaissakin Perheissä (Also in the Better Families, 2009) depicts the loneliness of a western society. It is a tragicomedy about a well-to-do family whose happiness fades away as everybody is too busy for being together. Paha lapsi (Problem Child, 2011) portrays how childhood is slowly destroyed when parents do not care and be present. Rakasta. Nyt. is a tender, musical love story that takes place in the shadow of the climate change.

A group of actors is anxiously awaiting their scripts for a play about shame which will be opening in five days, but then the playwright suffers a mental breakdown and the group is forced to develop the text themselves. The actors and director must confront their own shameful moments and turn them into theatre. At the same time, they must look themselves squarely in the eye and make decisions in their personal lives and relationships. Little by little they begin to understand that you don't always have to be strong and victorious, for there is power in weakness, too.

The play moves between the present, memory and the imagination. It deals with issues of sexuality, the body and subjection in a funny, touching and above all humane way. The audience can follow the characters on a journey from being uptight and anxious to experiencing freedom and joy.

The play has been translated into German.

When Aino's father gets a new job, which is both time-consuming and carries a lot of responsibility, he starts to undergo strange changes. Whereas he used to be really nice and willing to play, he now becomes irritable and tired, and finally withdraws depressed into his room. Aino decides that she must get her father to wake up and come back to life. A new friend, Lousy Larry, appears, who fails at everything he tries. Together they begin to develop ways of getting Aino's father to cheer up. They get constant advice from Louise, a long-departed ancestral mother, who is too full of life to remain dead. At the end, the children sitting in the audience must also provide the necessary advice.

Daddy's Winter Dream is a funny and beautiful play about the power of the imagination. It reminds parents how important it is to stop, take a break, and play with their children, despite the hurries of daily life. Lousy Larry's doings will entertain viewers of all ages, and the ending will bring a smile to the whole audience.

The play has been translated into Estonian. It has been performed at the Ugala Theater in Estonia.

The Northcliff family is slowly falling apart in their large apartment in a wealthy neighbourhood. Tina, an interior decorator, and Edward, a TV psychologist, are growing apart, and Tina's frustrations break out in sudden mood swings and emotional outbursts. Edward withdraws into work and becomes estranged from his family. Their ten-year-old daughter, Sylvia (named after Tina's favourite poet, Sylvia Plath), becomes increasingly lonely and isolated, both at school and at home. All these suppressed negative feelings come to the surface with the arrival of a new neighbour, the twenty-five-year old Sally Peak, onto whom the whole family begin piling their hopes and desperation, leading to an inevitable collision.

This play is a subtle, perceptive, compassionate and at times humorous examination of the processes of alienation and estrangement in a family. Melancholy in tone, it nevertheless shows that it is possible to break free from one's shackles and start again.

In 2006, Krogerus won the Finnish Critics' Association Award, given to a young artist who has broken new ground, for this play.

The Restwelle nursing home is struggling with demands for efficiency.  Staff is being reduced, there’s no certainty that contracts will be renewed, and those left behind are working longer hours. Increasingly often it’s the weakest one around who has to pick up the slack – usually Ritva, a fifty-year-old practical nurse who has taken care of others her whole life. She does her best to assist the home’s elderly residents and care for her developmentally disabled son, but exhaustion, her coworkers’ indifference, and uncertainty about the future tear at her more and more deeply. Even the most patient of us has limits.

Anna Krogerus’s text tackles one of the most difficult problems of modern society, the deterioration of care for the elderly. It concretely demonstrates how policies drafted above affect those at the grass roots. At the same time it is a precise psychological portrait of a person whose caring nature prompts her to give in to others again and again. Krogerus balances topical realism with engaging dark humor, a colorful cast of characters, and impressive scenic vision.

The play has been translated into English and Russian.

Eetu’s secure childhood started crumbling gradually, almost imperceptibly. His mom slowly sank deeper and deeper into a depression relieved only by the bar and the bottle. His dad spent all his days at work, and many of his nights as well. After mom was out of the picture, it didn’t take long for Eetu’s new stepmother to proclaim him a hopeless case and focus on getting a child of her own. The only one around to fill the void was Eetu’s schoolmate Dille, his good-time buddy in theft and beer-drinking. But eventually Eetu’s alternatives ran out. His stepmother demands he be sent to boarding school. His dead grandfather suggests a more permanent solution. But could there be one more chance? Is love still hiding somewhere, after all? Krogerus’ keen and harshly beautiful play gives a poetic visual form to childhood fears. It shows how previous generations transfer their traumas and anxieties to those that follow, without being able to help in overcoming them. At the same time, it speaks powerfully on behalf of intimacy and genuine caring. The play has been translated into English and was produced at the Edinburgh Fringe Festival in 2013. 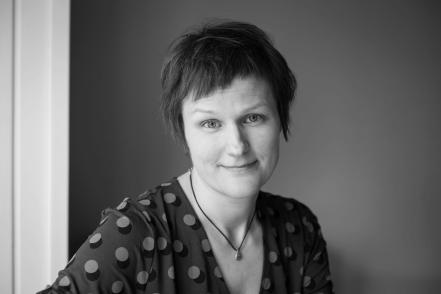