Playwright and director Jari Juutinen (b. 1959) does not shy away from difficult subjects. In I am Adolf Eichmann (2005) he shows us the man behind the war criminal. In Juliet, Juliet! (2007) he criticizes the destructive force of money, and in I am Faransis W. (2016) he delves into immigration, ultra-nationalism and terrorism. Despite their grim subjects, his plays are powerful theatrical experiences with humour and poetry. Juutinen’s work has a deeply moral core, and he wants to appeal to both the emotions and the intellect of the audience. He presents difficult questions, to which the spectators have to find their own answers.

Juutinen was one of the founders of the theatre company Teatteri Vanha Juko in the city of Lahti in 1995. He has worked as the artistic director of Lappeenranta Municipal Theatre and is currently the director of an internationally touring group sadsongskomplex:fi.

Adolf Eichmann is today considered one of Nazi Germany's most heartless bureaucrats due to his involvement in orchestrating the Jewish Holocaust. Yet, playwright Jari Juutinen is more interested in humanising than demonising Eichmann. The play asks a number of important questions about our understanding of ourselves, and looks at guilt, responsibility and forgiveness through a delicate balance of outrageous comedy and deep, sober tragedy. In Juutinen's view, today's pleasure-seeking, self-centred westerners actually have very little right to judge Eichmann. "We fly to Thailand for our holidays, even if we know air traffic's impact on global ecology. We buy products that we know were manufactured by children in conditions resembling concentration camps. I wonder if we actually have it in us to cast the first stone?" asks Juutinen.

The play has been translated into English, French, German and Spanish.

Juliet wears two faces. She’s a happy mother who loves her family. She’s also an anguished woman who kills her entire family and then herself.

Juliet grows up in the recession-era Finland. She dreams of Romeo and gets Raimo. He is a good man and the family grows first by one, then a second child. At first there is no shortage of happiness, but Juliet does have a problem. Money. The bills start swarming around the small family and Juliet’s anguish grows along with her debts. Still she’s not ready to give up on the standards of success. The family buys a house and vacations in the south. Naturally everything is funded by debt and the family economy is supported by payday loans.

One day Juliet crumbles under the weight. And the rest is silence.

The play has been translated into English, French and Georgian.

Is the world out of joint? Europe is drifting on the stormwaves of its own dissolution crisis, economic crisis, refugee crisis, terrorist acts and their fear effect. New wars break out on top of old ones and there’s no end in sight.

Jari Juutinen’s play is a retelling of Georg Büchner’s classic Woyzeck. One of its protagonists is Faransis W, poor son of a carpenter, who is jailed despite being innocent, tortured and kept in prison for years. He is radicalized and after being released, he kills. Or does he?

I am Faransis W is a theatrical kaleidoscope and a mixture of a TV game show, interrogation and a Kafkaesque nightmare It asks where the world is going now as we define our neighbours by colour, religion, nationality – or just by our day-to-day prejudices or coincidental intuitions. 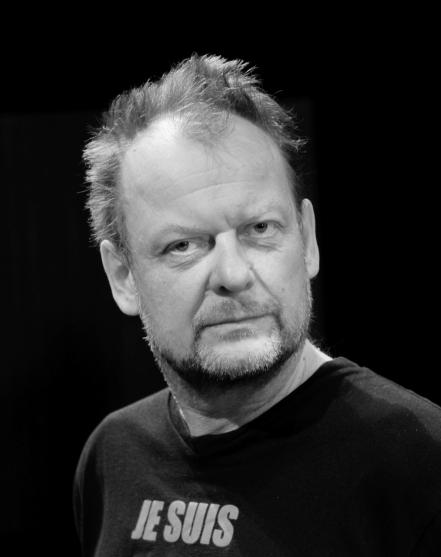