Juha Jokela (b. 1970) is a modern writer in the best sense of the word. His witty and surprising humour, compelling narratives and nuanced characterizations are tightly bound to the present moment. Whether focusing his sharp vision on the world of business or the spirit, he writes with deep understanding of the personalities involved.

Jokela began his career in television as a screen writer. His first play, Mobile Horror (A Mobile Horror, 2003), garnered unprecedented critical acclaim, and can truly be said to be one of the most successful plays in recent Finnish theatrical history. This comedy, set in a mobile phone company, was quickly produced by a number of theatre companies. Jokela's Nordic Drama Award-winning play, Fundamentalisti (The Fundamentalist,2006), is a more serious two-person play examining religious fanaticism; it, too, has achieved both popular and critical success. Jokela's highly-anticipated play Esitystalous (Performance Economy, 2010) premiered at the Espoo City Theatre into huge success. This satire deals with performance as a basic element of society, politics and business. The first season was sold out already in advance sales. Critics have praised the play for its phenomenal and witty dialog, humor and criticism against the contemporary society where narcissism has become the main fuel of all kind of action. Patriarkka (The Patriarch, 2012), the most tender and poetic of Jokela's plays, written for the Finnish National Theatre, was also a huge hit success among critics and audiences. The play won the Audience Award at the 2014 Heidelberger Stückemarkt. In 2013 Jokela continued the themes of Performance Economy in Esitystalous 2 - Tehtävä Espoossa (Performance Economy 2 - Mission: Espoo) which delved into the themes of local identity and the relationship between art and public power. Jokela's comedy Sumu (Fog, 2016)  is a sharp study of ethics, business and politics in the shadow of Russia. In 2013 Jokela received the Finnish Ministry of Culture's Finland Prize.

Terhi, the managing director of Dacutec, a mobile phone entertainment company, has recovered from a nervous breakdown and is now returning to work full of new ideas. She wants to re-think the firm's values and only market the kinds of products she can stand behind. With Gandhi as her model, she wants to bring joy and neighbourly love to the mobile phone business. Terhi's values are quickly put to the test, as hanging over Dacutec is the threat of a merger, and they need to develop a successful product in two weeks. Is there a space for these new, soft values when their jobs are at stake?

Juha Jokela's successful comedy examines the unforgiving pace and cut-throat competition of business life through razor-sharp humour and pointed dialogue. At the same time, the play considers the values of life more broadly, examining how these values ultimately need to be realized in everyday life, if only through small deeds.

"I'm the kind of bloke that says to himself ‘Do what you've got to do', ‘Take aim' and ‘Shoot', and that's what I do. But I don't wheedle. I have never wheedled. Ever."

The play has been translated into English, French, German, Hungarian, Swedish, Spanish, Croatian, Czech, Estonian, Greek, Italian and Slovak. It has been performed at the Svandovo Theatre in Prague, the Théâtre du Centaure in Luxembourg, the Wiesbaden Municipal Theatre, the Rostock Volkstheater in Germany, the Teatro della Limonaia in Firenze, Italy during the Intercity Festival, the Teatro E lGranero in Mexico City during DramaFest 2012 and at the Ugala Theatre in Estonia.

Markus, a reform-minded minister fed up with the inflexibility of the church, meets his old friend Heidi after twenty years. She has become a fanatical Sectarian who wants to save Markus from going to hell. Markus is shocked, but also wants to understand Heidi and help her. Between them develops a wrenching spiritual battle, where they are forced to re-evaluate what they believe and why. Markus must admit his own responsibility for Heidi's state as well as come to terms with his own inner fundamentalism. In this suspenseful and subtle play, unquestioned religious beliefs collide with modern-day pluralism and tolerance. The play forces us to look inside ourselves, to question the values which shape our lives. The play does not preach, but instead considers these questions from many points of view. It is not only about religion, but also about the search for truth and the ways two people can forge a relationship.

The play has been translated into English, Swedish, German, Latvian, Lithuanian, Danish, Faroese, Russian and Norwegian. It has been performed at the TVAZZ –Company in Faroe Islands, at the Jaunais Rīgas Teātris (the New Riga Theatre) in Latvia, at the Theater Aachen in Germany, at the Scandinavian American Theatre Company in New York (inv. to the New York International Fringe Festival), at the Lithuanian National Drama Theatre in Vilnius and at the Det Norske Teatret in Oslo.

The play won the Nordic Drama Award in 2008.

Social Democrat MP Jaana wants to resuscitate her retrograde, floundering party with a radical poverty program. Rami, a ruthless corporate coach who has raked it in with his Performance Economy concept, starts sparring the provincial wheeler and dealer OT Toivio. Single mother and sociologist Hanna is studying the relationship between performance and society; but conducting scientific research and making ends meet is a difficult equation.

Performance Economy is a satire about life that has turned into nothing but performance; this theme is considered through the prisms of sociology, tabloids, the business world, as well as local and party politics. The fragmentary scenes come together in a narrative whole that aptly illustrates the significance of the media in contemporary society. Political preaching is replaced with polyvocal narration that challenges us to consider dramatic structures in politics and everyday life.

“Don’t laugh too hard. You’re performing yourselves at this very moment. Your instincts are sending you impulses, telling you how an audience member is supposed to act.”

The play has been translated into English and Danish.

Upon their retirement, construction engineer Heimo and language arts teacher Virpi move to France. Yet Heimo finds it impossible to settle into a life of leisure; a man of action, he is used to shouldering responsibility. Despite Virpi’s resistance, he is determined to go back to Finland to see if there is one more service he can perform for his country. Their return disrupts the lives of the couple and their children, calling to the surface tensions and suppressed feelings that have accumulated over the years. Intergenerational conflict comes to a head when all that has been left unsaid comes bursting out. Each member of the family is forced to look in the mirror and ask, “What is my place in the world?”

Written for the Finnish National Theatre’s 140-year anniversary, the text skilfully melds universal and personal themes: conflicts between generations and genders, the changing world, aging, and love. In the minds of many, its biting, funny dialogue, intellectual and emotionally engaging storyline, and revealing yet empathetic portrayal of humanity made the production the theatre event of the year.

The play has been translated into English and German.

”Jokela’s dialogue is sharp, bright, and funny – it’s hard to think of a production this good in the recent history of the Finnish National Theatre.”
-Marketta Mattila, Teatteri & Tanssi

”The ideological debates are so pithy that the audience can’t help but be entertained.”
-Soila Lehtonen, Aamulehti

A playwright gets a call from the mayor and soon finds himself enlisted into the City of Espoo's 'brand identity team'. Their assignment is to create a story and an identity for Espoo, something that captures the essence of the city in the present and the future. But every team member has their own vision that clashes with the others, not to mention their inner conflicts. The clock is ticking and pressure is mounting on the writer to show some results to justify his big paycheck. Is there anything real or solid in Espoo?

Juka Jokela's satirical comedy brings today's clash of culture, economics and politics to the stage in a sharp and wickedly funny way. The play explores the crisis of identity and the absence of universal experience in contemporary urban life. It also asks questions about the essence of stories and the human need to find something permanent in a world that is in a constant change.

"Juha Jokela has written and directed a touching account of being an
artist, making art and how the economy effects both of these things."

"The lines and the reactions are so natural and believable, and
therefore funny, that three hours pass in a flash."

In early 2014, Somnimag, a small technology company, has developed a revolutionary brain scan machine, but needs marketing capital to sell it. When the company receives government funding to export the product to its eastern neighbour, the company directors are faced with a moral dilemma: is doing business with Putin’s Russia a viable option? Olli, the CEO, is between a rock and a hard place, as Jone, the Marketing Director, is willing to put morals aside for the project, whereas Taisto, the Head of Research, is against any kind of cooperation with Russia. As Russia's domestic and foreign policies become more and more difficult to predict and the new hire, Russian-Finnish Larissa appears to be so qualified as to be suspicious, there is no return from the grey area.

Juha Jokela brings his famously intelligent and humorous touch to the eternal theme of a small country's balancing act in the shadow of a large and unpredictable neighbour.

The play has been translated into English, Estonian and Latvian. It has been produced at Estonian Drama Theatre and Latvian National Theatre.

"The characters in Juha Jokela's new play are trudging through thick fog, but for the audience the work opens up like a clear autumn day. And a crisp one too, just as a comedy should be."

"Jokela is exceptionally skillful in making ideological and human fixations collide in his marvelously natural dialogue. The characters are always deliciously our contemporaries, us." 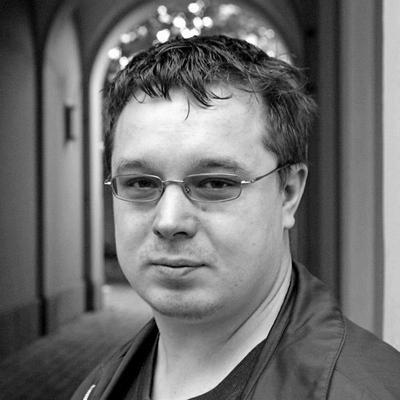